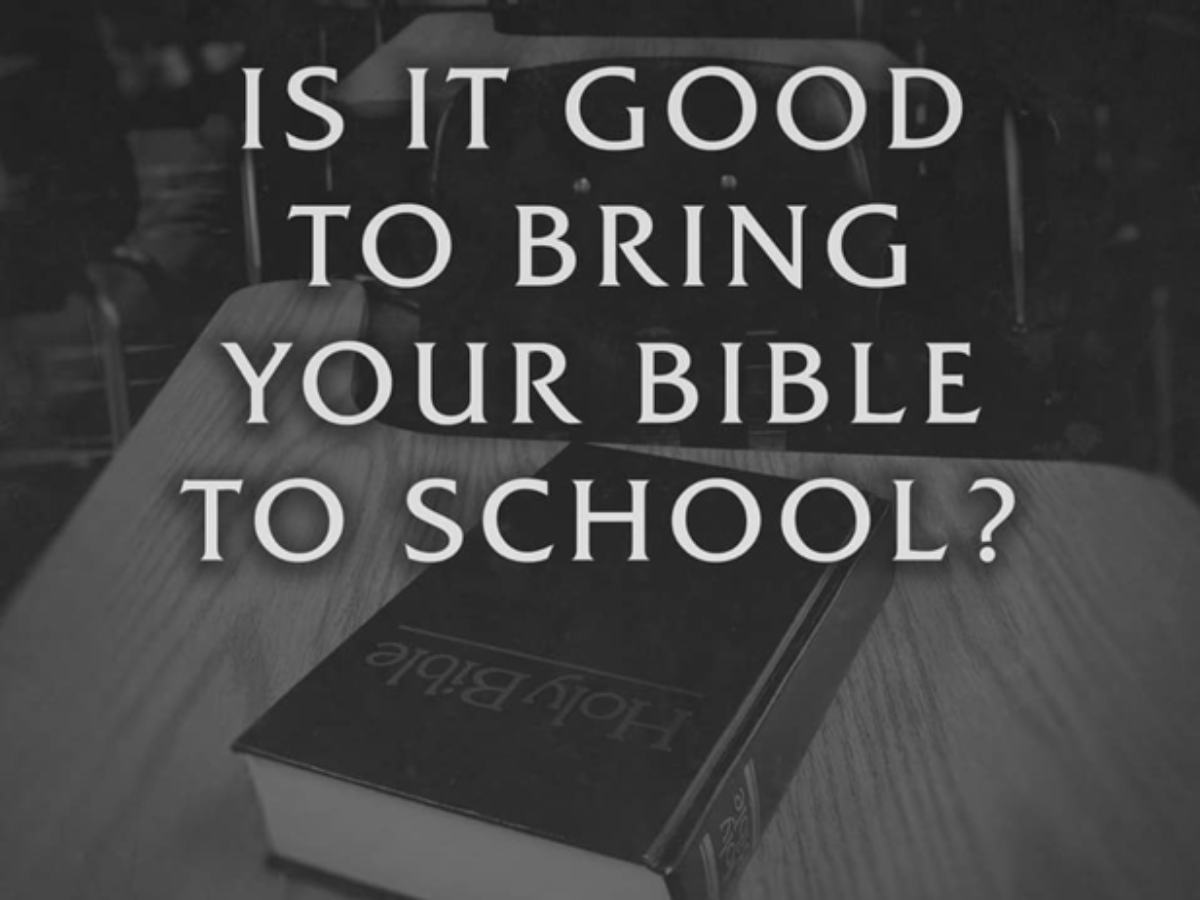 Tomorrow (October 3) is ?bring your bible to school day.? There has been a small amount of people who are upset with this, which was somewhat highlighted with the video made by Drew Brees a few weeks ago where he encouraged kids to bring their bibles and ‘spread God’s love.? Some people are suggesting by bringing bibles that it could be bullying to other kids who are outside of the christian faith. This sounds like a stretch to me personally, but I started thinking about it. Is it really a good thing to bring your bible to school?

Let me state my point of view and then expound. In my view, I can literally think of nothing else that could be better for the world, our schools, or for young people-who are experiencing ever increasing rates of suicide and depression btw-than for true followers of Jesus to bring their bibles and truly live out their faith. However, i do have a couple of caveats with this opinion that i will mention momentarily. I also understand that there are those who have unfortunately had negative experiences with Christians in the past, which we must take into account. The Bible says ?The kingdom of God is righteousness, peace and joy in the Holy Spirit.? (Romans 14:17). How many of our school kids and teens experience just 1 of those things in a given week? Peace? Joy? Righteousness?The problem is not Christianity. The problem is the lack of genuine Christianity.

For the most part, Christians are doing one of two things when it comes to our stance on serving God publicly and living out our faith. Frankly, I think both of these stances are faulty.

Imo, both of these approaches are wrong. The answer lies in a delicate balance of love and holiness. As followers of Jesus we are NOT called to judge others from outside of our faith. It is not our job to guilt someone else’s conscience. That is the job of the Holy Spirit. Christians are called to love people no matter who they are or what they?ve done or what they believe etc. There is no person who can be outside of the scope of our love-just as there is no person outside of the scope of the love of Christ! Therefore, this notion of bullying people by bringing our bibles is without substance. That is, unless we are not acting like Jesus in our love for sinners! We are called to love and befriend people whether or not they adhere to our faith. Don’t forget, we adhere to the Bible, not because we are better than other people, but because God gave us a new heart that WANTS to pursue holiness. Without God’s gift of redemption and re-creation, we could not adhere to His Word in the first place! So why would we expect those who are not redeemed to act as though they have a new nature?

On the other hand, in our desire to love people and show acceptance we must not weaken the principles by which the Bible tells us how to live! We can not and must not compromise His word! For if we compromise His word, even in a desire to win people to His name, then we are in fact not bringing them to the true cross of Christ but rather we are bringing them to an idol of our own making. Furthermore, a Christ of our own making is not a messiah at all, but rather an idol whose redemption would be powerless. Our God is a loving God, but He is also a holy God.

So what should you do?

You do not have to bring your bible to school in order to live out your faith because His Word is hidden in your heart! But if you choose to express your faith by bringing it, just realize that you are representing Christ in everything that you do. The Bible should remind you that you are called to love the unloving, forgive those who sin against you, and even pray for your enemies! The presence of your bible should remind you that there was a time when you had no hope and no home, but God called you to be a part of His family. Therefore, If you say that you are a christian, then bullying people is against your calling, against your God, and against your new divine nature.

On the other side of the coin, your Bible should also remind you that God has called you to holy living. And he has given you boundaries in His word for how to do so. We should never be bullied in to saying that we believe things that we do not, even if our faith seems exclusive. The tension that we must hold is in these two truths: we must hold to the standards that the Bible gives us, while simultaneously loving people who do not hold to those biblical standards. The definition of accepting someone is not ‘to agree with everything someone else believes in order to get along.? Accepting someone else means that even if you disagree with their beliefs, life choices etc, that you still love them nonetheless. We all need to have friendships with people that are not like us in order to have a civil society, and also to spread the good news of Christ to the world.

Final thoughts:
If you are someone who in fact has been bullied (in the real meaning of the term: been treated poorly or abusively for who you are or what you believe) by a Christian, I would like to apologize. That is not how Jesus loved others according to the Bible. My second thought is that if a Christian person has disagreed with you because they believe something differently than you do, but that Christian person has treated you with dignity and respect in spite of your differences…then I would not call that bullying. That is called true friendship. And true friendship amongst diverse people is a beautiful thing that our society needs much more of! And finally, if you are a Christian that bullies people that do not believe in the Bible, then I would say that there is a much greater issue than whether or not to bring your bible to school. May we never forget who we were before we met Jesus. May we never forget where we would be without Him. Lost, alone, afraid, hopeless, and in desperate need of a savior.